Theater in the  Barn

Pictured Above: The very popular production, Smoke on the Mountain, was performed twice at Homeplace in 2018.

​The Stage in the Bank Barn

The original Bank Barn (so named for the way it is build into the bank of a hill) was originally built in the 1860s. The stage is lit with overhead, adjustable lighting and a large backstage area which nicely services the performances.  The seating can be adapted for a small, intimate, near stage experience and for event seating up to 150 when utilizing our unique Straw Bale Bleachers.  As you might expect, the Straw Bale Bleachers are always a hit with the children.  Being a wooden building with a high barn ceiling and rectangular shape, the barn fosters the most beautiful tones from voices or acoustic instruments.  The sound quality in the space is incredible and so warm and rich, it has to be heard to be believed.   The Bank Barn Theatre has two large sliding doors and a board and batten design which bring the hills "alive with the sound of music"!

We invite theater troupes, poets, and musicians to utilize our space, with opportunities to either rent or to participate in events we are hosting for entertainment the whole community can enjoy.
Theater in the Barn at Homeplace

The bank barn at Homeplace is a unique venue. Renovation of the barn, which was built in the mid-1860s, included complete reconstruction and addition of the stage as designed by Lindsey Wilson Director of Theater, Professor Robert Brock. ​The setting is informal and retains much of the charm of an early barn. 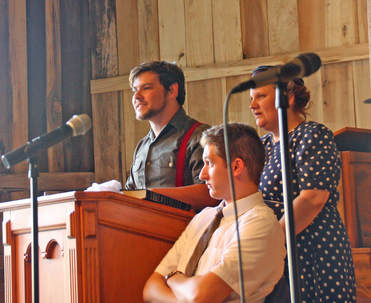