The Foster Children provided Gospel and country-western music at the 2019 Homeplace Fall Heritage Festival. On the left, a reporter from the national TV Network, Rural TV, was on hand to video the day's activities. Rural TV also filmed the spring plow day. If you would like to purchase a DVD's of either the Spring or Fall Festival contact Billy Joe Fudge at billy.libil@gmail.com. 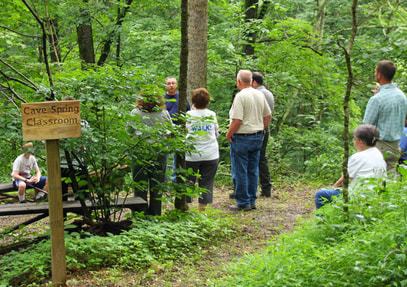 The trail system is open

​The Tebbs Bend-Green River five mile trail system is open from sunrise until sunset daily. Trail heads are located at Homplace on Green River beside the show barn and at the historic Tebbs Bend toll house on Tebbs Bend Road just before the river crossing.

The 5.23 miles of interlocking trails traverse several eco-systems including the restored Blue Heron Wetlands, forests, streams and prairies, habitats for wood ducks, cranes, eagles, wild turkeys, beaver, deer, otter and many other species of animals and birds. There are cut backs that allow hikers to walk either short or long distances. Much of the trail system is level, but some is more moderate in difficulty.

Homeplace is located at 5807 New Columbia Road (State Highway 55) 14 miles north of Columbia and Five miles south of Campbellsville.  Watch for the signs.
Improvements on the home at Homeplace continue

Work continues to restore and protect the original home at Homeplace which was build in 1803-04. Thanks to a generous gift from Mr. Paul Vogt, the house's roof was replaced several years ago, but because of the unusual structure of the roof, a leak occurred at one point and in July the problem was corrected.  The house gutters were also replaced.
Much work still needs to be done, and we are seeking volunteers to replace baseboard in one room, install an electric range in the kitchen, and to remove a ground hog that
has taken up residence under the house.

Homeplace is dependent on volunteers and the board appreciates the many who have helped make Homeplace Kentucky's Outdoor Classroom! 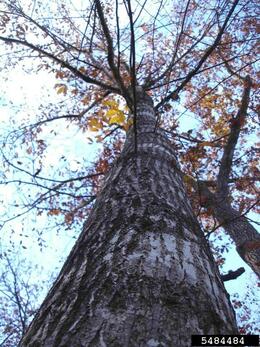 Before the early 1900’s, the American Chestnut was the queen of Kentucky’s woodlands. It dominated America’s eastern forests. Because it could grow rapidly and attain huge size, the tree was often the outstanding visual feature in both urban and rural landscapes. The wood was used wherever strength and rot-resistance were needed.

American Chestnut dominated eastern hardwood forests; an estimated
three to four billion trees prospered across more than 300 million acres. Known as “redwoods of the east,” chestnuts grew fast and big and lived long, many reaching more than 100 feet in height, with diameters exceed­ing 12 feet, and living up to three centuries.
The American Chestnut’s edible nut was also a significant contributor to the rural economy. Hogs and cattle were often fattened for market or consumption by allowing them to forage in chestnut-dominated forests. There is no doubt the early domestic animals at Homeplace feasted on chestnuts. Chestnut ripening coincided with the Thanksgiving-Christmas holiday season. “Chestnuts roasting on an open fire” were common all winter long. Turn of the century newspaper articles showed railroad cars overflowing with chestnuts rolling into ma­jor cities to be sold fresh or roasted. The American Chestnut is truly a heritage tree.

All of this began to change about the turn of the nineteenth century with the introduction of chestnut blight. This disease reduced the American chestnut from its position as the dominant tree species in the eastern forest ecosystem to little more than an early-succession-stage shrub. There has been essentially no newly harvested chestnut lumber sold in the U.S for a century, and the bulk of the annual 20-million-pound nut crop now comes from introduced chestnut species or imported nuts.

Today, more than 100 years after the blight forced it into near extinction; scientists are resurrecting the once-great tree. Homeplace has been selected as one of the places to advance the effort to bring this beautiful and useful tree back to Kentucky’s forests. Only a few isolated trees are still standing in Kentucky. One is in Adair County; its location protected. It is designated a “mother tree” because it continues to produce highly blight-resistant viable seeds which are harvested and replanted in selected protected environments.

Despite its decimation as a lumber and nut crop species, the American Chestnut is technically not extinct. It is, however, considered functionally extinct by the U. S. Department of Agriculture because the blight does not kill the tree's root system. The American chestnut has survived by sending up stump and root sprouts that grow vigorously in the woodlands understory and inevitably succumb to the blight and die back to ground level.

​Seedlings from several states will be moved to the mother tree nurse­ry at Homeplace where they will be nurtured through attacks from the blight. When they begin flowering, about five or six years after planting at Homeplace, the blooms will be bagged to prevent natural pollination. Pollen from blight-resistant chestnut trees will be used to pollinate mother trees. This process will produce seeds which will be planted to produce seedlings. If all goes well, at least 50% of these first generation seed­lings will be fully resistant to the blight and will produce trees that will be a significant step toward returning these queens of Kentucky’s forests.
The information for this article was compiled for multiple sources including the American Chestnut Foundation. The photo of the towering American Chestnut tree is courtesy of the U.S.Department of Agriculture.

​Homeplace hosted the Adair County Garden Club March 22 for a workshop on building bat houses and learning how to attract the bats.
Bats have taken a bad rap over the years but are quite beneficial.  They can eat more than 1,200 mosquitoes an hour, often, consuming their body weight in insects every night.

Unfortunately, in Kentucky the bat population is in serious decline due to habitat loss, pesticides and most importantly white nose syndrome, a fungal disease that has killed millions of bats in North America since it was first noticed in a single cave in New York in 2007.  The loss of bats to white nose syndrome is the most precipitous wildlife collapse of the past century.
The garden club’s workshop is an effort to help preserve our bats.

​Inexpensive bat house kits are available through Amazon and other on-line distributors or locally over counter at Ace Hardware, Tractor Supply, Walmart or other local stores.
Try it, it’s fun☺
We have made it easier for you to support Homeplace on Green River with your dollars. We need your help if we are to continue to preserve our rural heritage and promote sustainable agriculture. Please consider joining us in our efforts. You will receive a receipt for your taxes since Homeplace is a 501(c)(3) registered non-profit.There is now a link to PayPal on the HP Web page to make your contribution. ( www.homeplacefarmky.org) You can contribute from your PayPal balance or with a Visa, Master Card, American Express or Discover credit card. You do not have to be a PayPal member to contribute. It’s all very secure.  just click on Homeplace Web page link above and on the "contribute" link on the opening page. Be sure to type "donation" and what it is for if it's for a special project on the "ad special instructions to the seller" link.   Try it, it’s fun.

​Log Pen Barn protective pavilion completed
​
Homeplace is fortunate to have a very early example of a log pen that was donated to the farm by Taylor County’s Gwynette and Ronnie Sullivan family. The earliest structures Kentucky settlers built along with their cabins and forts were log pens to protect their animals. The structure at Homeplace, built largely with Amercian Chestnut logs in excellent condition, is thought to be from the early 1800s. It is a fine example of these early log buildings.

The log pen was taken down by Homeplace volunteers and transported to Homeplace where it has been reassembled and will eventially serve as the centerpiece in a building to house early farm equipment and an area to demonstrate early Kentucky farm implements and techniques.

The first step in preserving the log pen has been completed with the construction of this pavilion. The protective pavilion was completed in June thanks to an anonymous donor who offered a $5,000 matching grant and 32 businesses and individuals who stepped-up and matched that $5,000 in just a little over one month. The next step will be to covert the pavilion in to a building suitable to display and demonstration of historic farm implements.  Homeplace has assigned a high priority to funding completion of the project.

​Construction of the pavilion to protect the Log pen barn began April 26  and was completed in mid-June. For a photos of the progress of that constuction  click here.
​
The names of those who made this initial step possible are listed below. We are hopeful others will step up and help with funding the completion of the museum.        (6-20-17)

The pavilion will be the foundation for a completed building housing the log pen and early farm equipment and implements, which remains a high priority as soon as funding become available.

​Below is a preliminary plan for the finished building. 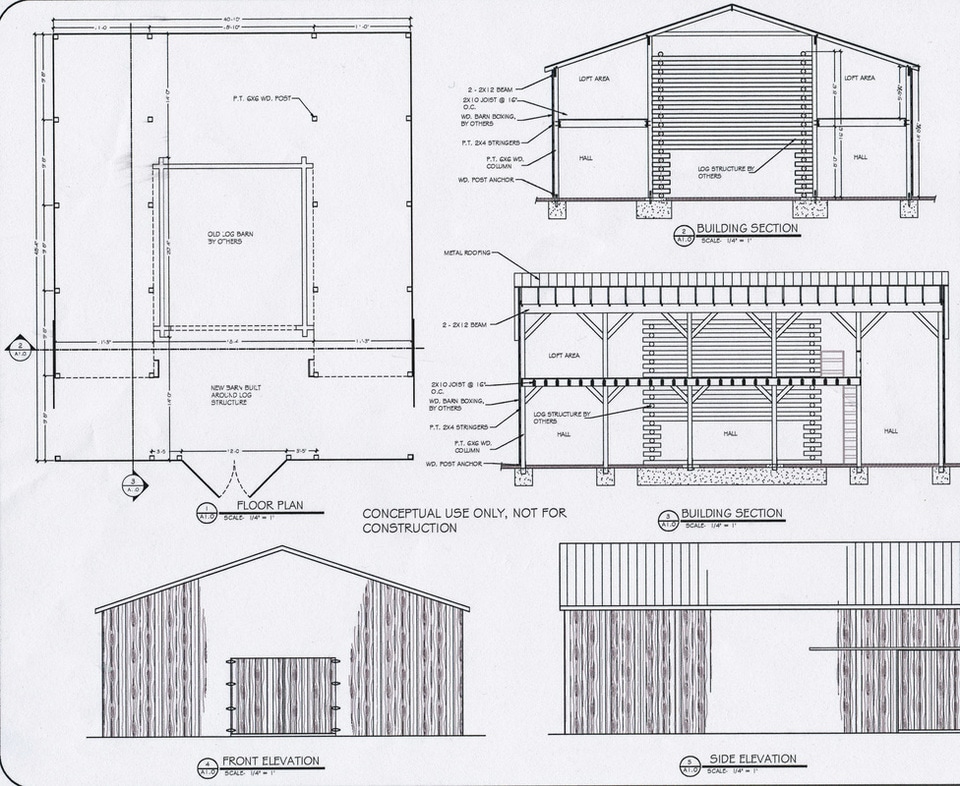 Thanks to these donors who helped save the log pen barn! 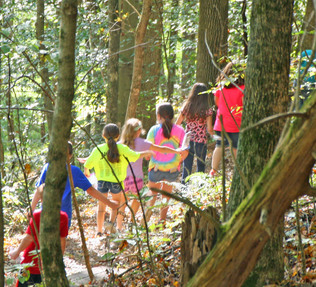 Kentucky’s Outdoor Classroom welcomes hundreds of school students
​
Homeplace on Green River is living up to its designation as Kentucky’s outdoor classroom. Several hundred students from Adair and Taylor counties completed field trips to the farm in to learn about the importance of farm crops, animals, woodlands and seldom seen creatures in our everyday lives.
The students were divided into groups and had different “stations” to visit. Homeplace board members and other volunteers led sessions on plants, animals and insects on the farm including detailed examinations of decaying logs, tree identification, the importance of the local waters, farms and woodlands. The cost was covered in part by grants for the Taylor County students and financial support by the Adair County Farm Bureau for the Adair students.

​Students from Campbellsville Independent and Taylor County Schools as well as Lindsey Wilson College classes have also used Homeplace this year as an outdoor classroom.

​The continued use of Homeplace by Kentucky’s school systems provides an opportunity to acquaint students with the significance of agriculture in their lives and develops an appreciation of the long history of farming in the commonwealth. It will also help develop in them an appreciation of our environment.
For additional photos click here   (updated 2-5-19)
​Kentucky Senate affirms Homeplace as Kentucky's Outdoor Classroom
​
The Kentucky Senate passed a resolution March 3, 2016 recognizing Homeplace as "Kentucky's Outdoor Classroom and recognizing the "efforts and accomplishments of Homeplace on Green River."  In the resolution the Senate declares their "appreciation to this historic farm and all its volunteers for their dedication to the protection and promotion of agriculture in the Commonwealth and for providing strong and unique educational opportunities to individuals of all ages."  The resolution concludes, "When the Senate adjourns today, it does so in honor of Homeplace on Green River, Kentucky's Outdoor Classroom."  (3-3-16) 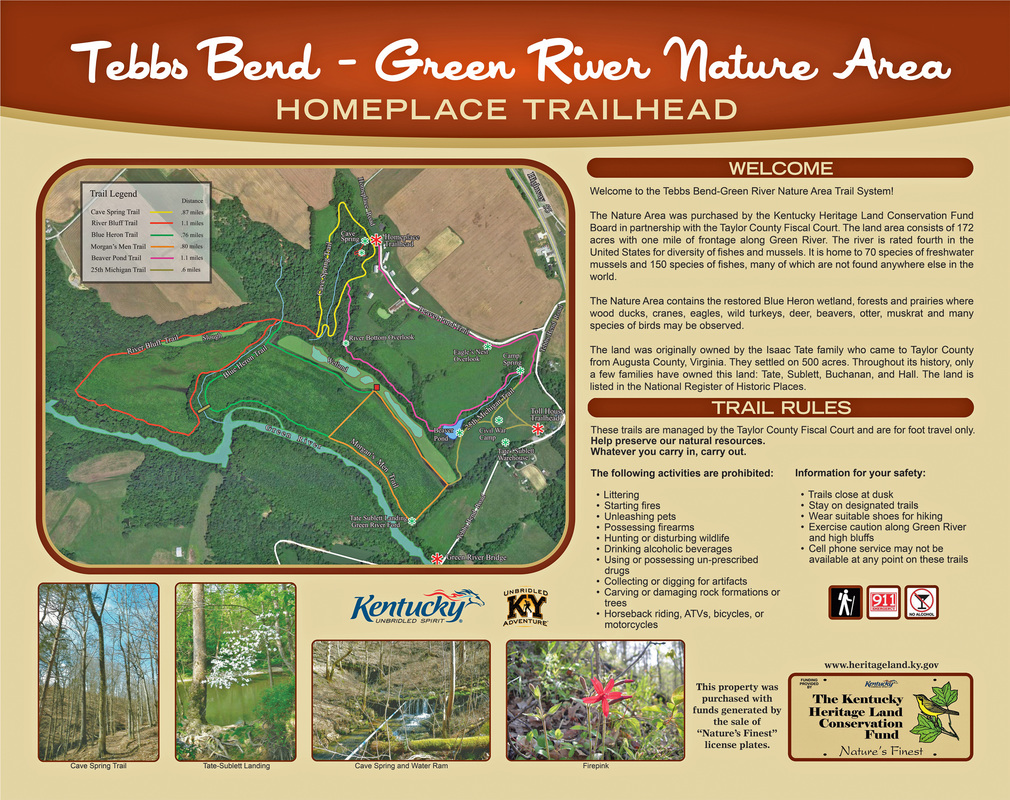